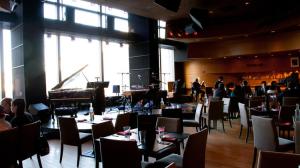 Beyond these floor to ceiling glass windows is the skyscraperscape of New York City! We sit at these tables, eat our ‘southern inspired fare’, watch the sun set on Central Park, muse over the fairy lights of Columbus Circle and have the best jazz experience imaginable.

1.  Always check the opening hours of the big department stores – some open at 10.00am, others at 11.00am, and closing hours vary as well, but are usually longer than we are used to.

2.  Macys, Bloomingdales and other stores have a Visitors’ Center that offers discounts to international customers. Ask one of the attendants for directions when you first arrive. Some also offer gifts if you spend over a certain amount, eg $300 and individual assistants will often top up your freebies!  Always ask if a discount applies.

4.  My favourite New York shops are the Museum shops, in particular: the Met Museum x 2, the Met Opera, MoMA x 2, the Tenement Museum, the Guggenheim, The Cloisters

Viber: for free calls and free texts when you and your contact are both connected to the internet. We have free wifi in our rooms at the Intercontinental, so it is an extremely useful and cost effective way of communicating with people at home.

Uber: online taxi service. You may want to investigate setting up an account.

Hard-working political, religious and socially aspirational refugees, and some adventurers from England, France and the Netherlands (Protestants, Puritans, Quakers, Huguenots) colonise along the east coast of North America, displacing original inhabitants; New York settled originally by the Dutch, surrendered by them to the English in 1664; England eventually gains control of most colonies; new settlers begin to feel oppressed by British home government; War of Rebellion/Declaration of Independence 1783; Westward Expansion: Civil War 1861; USA evolves into independent, free nation and emerges from WWI a world leader.

The short story: with some images

Prior to 17th C – Christopher Columbus 1492 (Spain) arrives in the Americas, but not New York; 1524 Verrazano (hired by French) enters NY Harbour, Verrazano Bridge; French & Spanish fight it out in Carolina, Florida and Grand Canyon